Taking a newbie/foodie on her first duck hunt

As a woman who didn't take up hunting until the age of 41, I love helping fellow adults - especially women - go out and get their first hunting experiences. In the case of Kelly Cox, we shared her first duck hunt in front of a camera.

Kelly is the creator of Original Fare, a PBS Food video series, and as part of the series, she decided this year to try hunting for her food. Check out the video on our hunt, then keep scrolling - I'll have a bit more to say.


OK, so much to say, but the first thing is that a new survey this year finally validated what I've been saying for a few years now: "(O)btaining meat is an increasingly important motivation among American hunters to go afield. While there are several reasons for this growth in the segment of hunters who engage in hunting for utilitarian reasons, several of Responsive Management's new studies make clear that the trend is widespread and unmistakable."

Translation: People want high quality meat, and they're willing to hunt for it.

Kelly - a former vegetarian who still shuns factory-farmed meat - definitely falls into that category, and she's part of a group of people whom hunters should do everything possible to welcome into the fold. It was really exciting to be in a video that I knew was going to reach an audience that cares a LOT about where its food comes from, but isn't necessarily familiar with hunting. Opportunity!

Now, onto the details: Kelly was a fantastic shot. I think she hit her first eight or nine clays in that first session with Dale Tate. And the bird she got was the first bird she shot at. Woot!

Next: She fell in love with the marsh, despite what you can't see in the video: that a couple assholes set up really close to us and seriously marred our hunt. She took that in stride and focused on what so many of us love: the beauty of the birds that live in that world so few people see up close.

Next: A few days before the hunt, she mentioned that I'd be cooking something. I'm not sure why it hadn't occurred to me - it is a food show - but I was a bit of a deer in the headlights. I'm not the star of my kitchen; Hank is! But Hank was on the road, promoting his new cookbook (with photos by me), Duck, Duck, Goose

I quickly realized, though, that one of my favorite ways to eat duck is simply salting it, pan searing it, slicing it up, and maybe topping it with a squirt of lemon juice and some pepper. I can do that!

So I did, and the result was delicious. It didn't hurt that I had a couple pintails on hand, so Kelly and cinematographer Lucas Longacre's first taste of wild duck was as good as it gets.

We could barely speak as we ate.

Finally: When you surrender your actions to others, whether they're filmmakers, writers or photographers, you never know what you're going to get. In this case, I have to say what they produced is completely accurate - the only error in it is my own, and it's worth noting here:

When I was cooking, I said the biggest mistake people make cooking duck is not cooking it long enough. What I meant was that's the big mistake when they're pan searing duck, where you never seem to trust yourself to let it go long enough. For the most part, people tend to overcook duck, which is the worst thing you can do to a duck breast. My bad! As the politicians say, I misspoke.

All in all, this was a thoroughly wonderful experience. Kelly and Lucas are welcome in my home and my duck blind (such as it is) any time.

A post-meal grace for the first duck of the season: a column for Shotgun Life 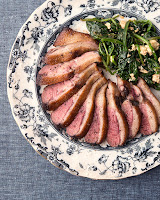 I'm not a particularly prayerful person, but my first duck of the 2013-14 season tasted so damn good it was worth a special prayer.

Read all about it in my latest column for Shotgun Life.

After writing about hunting on a blog called NorCal Cazadora for four and a half years, I moved on, focusing on freelance writing, photography and even a little videography, mostly on the topics of hunting, food and nature, and the niche they share. This website is your portal to all of that work that is available online.
If you're looking for my photography, you'll find it at photo.hollyheyser.com.
To be notified whenever I have new material published, just subscribe to this site by email. You'll get email only when something new goes up, and I won't sell or give your email address to the vermin of the internet. I won't give it to nice people, either.
Oh yeah, the photo above? Flank feathers from a hen pintail duck. You can see more photos like that here.

Topics and types of work

Holly Heyser
Holly A. Heyser is a former newspaper reporter and editor who went on her first hunt at age 41 and immediately fell in love with the honesty, grace and humility of acquiring food the hard way. She has combined her two loves - journalism and hunting - in her current job as editor of California Waterfowl Magazine. She does food photography on the side, and she is co-organizer of the annual Novice Women's Duck Hunt in Northern California. Click here to contact her.